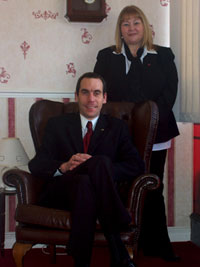 Mark Woollard became a partner in Kent’s funeral parlour in 1998 following a distinguished funeral services career with a leading London firm of Funeral Directors A France & Son. During his time in London he officiated over the burial of Cardinal Basil Hume, Archbishop of Westminster. This highly televised funeral service was one of several “celebrity” funerals that Mark has been involved with. He directed the funeral of Hollywood Stunt coordinator Terry Forrestalas well as assisting with the funerals of both the author Anthony Burgess and Jennifer Pattison of “Two Fat Ladies” fame.

Mark is devoted to his job and enjoys the close-knit community spirit of Whitstable. He gets a real satisfaction from the care side of his work. “When I can help people at the time of their bereavement, and they inform me that I have provided a good service – well, I can’t ask for more than that.”

SAIF was established in 1989 and represents more than 870 privately owned, independent funeral homes across the UK. They work hard within the profession to promote best practice and protect the interests of our members and their local communities. Along with representing the views of our members at a national and local level we also provide training and education programmes to ensure they continue to meet the highest of standards. By choosing a SAIF member, bereaved families can be assured of a compassionate, professional approach, underpinned by our industry leading Code of Practice.

Mark has a son called Jack, who we hope will follow in his footsteps with the business.

Mark also has a very keen interest in Bee, in fact Marks has 5 beehives locally at Whitstable Castle and Faversham and enters competitions locally.

Whitstable: Monday to Friday 9 am to 5 pm

Canterbury: Monday to Friday 10 am to 4 pm